BMW issued a recall with the National Highway Traffic Safety Administration (NHTSA) for the all-new 2020 Toyota Supra. The recall involves a problem where the seat belt guides may not be properly welded to the car’s frame, which represents a major safety issue. Also, yes, BMW is recalling a Toyota.

It’s no mystery that BMW is largely responsible for the Supra’s underpinnings, which includes overseeing Magna Steyr’s production of the Supra in Graz, Austria. As a result, it means BMW is responsible for handling any manufacturing defects, including all recalls worldwide. Technically there would be a few drivetrain components that could potentially fall under the Toyota umbrella if recalled, but it's safe to say most Supra related issues will have to be handled by BMW.
NHTSA

According to the report, only seven Supras are affected and only three of them are in the hands of their owners already. Sadly, however, because of the nature of the problem, these owners won't be able to take their cars to a BMW dealership to have the issue remedied—nor a Toyota dealership. In fact, they'll have to get a whole new car because the seat belt loop involves a welding point on the car’s body in addition to being a major safety component.

A component of this caliber can't simply be welded back on. Even if it could, a repair would pose an enormous liability to both companies, hence why these owners have to get brand-new cars. Affected owners can find the recall under campaign number 19V653000. 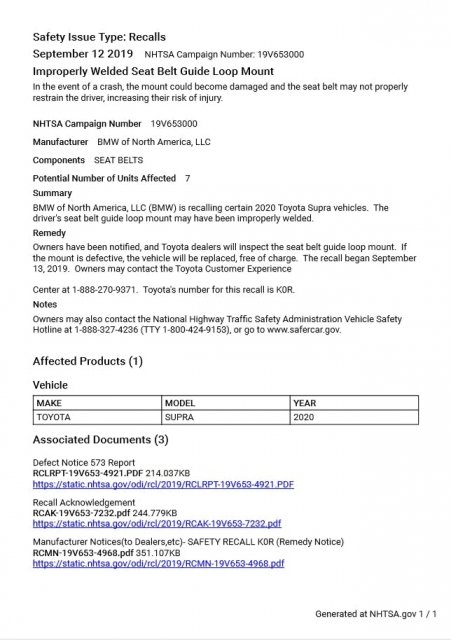